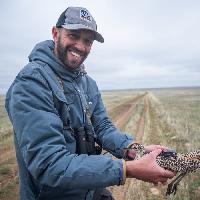 Boyce is interested in just about every aspect of how birds live, where they are found and how evolution shapes the way they reproduce and care for their young. Often, his work focuses on entire communities rather than on single species. Understanding how species that live together interact, and how the environment shapes which species are present and absent, are both critical to comprehending how nature works and vitally important for conservation.

Boyce’s fascination with birds and biology started in the tropical forests of Venezuela and Borneo, but these days he applies them to a system closer to home — the short-grass prairie and sagebrush steppe of Eastern Montana. Current research at the American Prairie Reserve is expanding to include a study of how variation in habitat selection and movement patterns of bison and cattle impact riparian (streamside) vegetation, the birds that breed and migrate through these areas, and the use of riparian corridors by native mammals.

Boyce lives in Missoula Montana and does most of his fieldwork on the Northern Great Plains of eastern Montana in Phillips, Blaine and Valley counties. He is inevitably accompanied by his German shorthaired pointer, Otus.