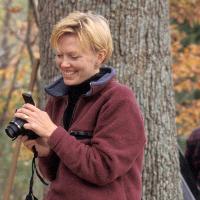 Kari Bruwelheide is a physical and forensic anthropologist at the National Museum of Natural History. She studies human bones and mummified remains for clues about who people were, how they lived, and how they died. This work includes lab analysis, body search and recovery in forensic cases, and field excavation at archaeological sites. Kari earned her B.A. from Luther College in Iowa, with majors in both English and Anthropology. Professors encouraged her to pursue a graduate degree in Anthropology. It was then, through volunteer projects working with large skeletal collections, that she discovered her fascination with human bones and the information they contain. After earning a Master’s degree in Physical Anthropology from the University of Nebraska and studying mummies in Peru, she came to work at the Smithsonian.

Today, her research is varied and ranges from forensic casework for law enforcement agencies, to studying remains from 19th century cast iron coffins, to the examination of ancient skeletons as old as 10,000 years. Currently Kari’s work is focused on the documentation of early European and African human remains in the Americas, specifically in the Chesapeake region of Virginia and Maryland. By studying these skeletons, the unwritten records of early immigrants and slaves are slowly being compiled giving us an expanded view of settlement, health, and adaptation, at both the personal and population level. Kari loves being able to tell the stories of people who can no longer speak for themselves.