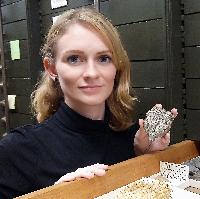 Lena is a research geologist and curator of fossil crinoids and other fossil invertebrates at the Smithsonian Institution's National Museum of Natural History. After receiving her PhD from The Ohio State University in 2017, Lena completed postdoctoral fellowships at the NMNH (2017-2018) and American Museum of Natural History (2018-2020). Her research uses the marine invertebrate fossil record to understand macroevolutionary patterns and their driving processes. In particular, Lena is an expert on fossil crinoids (Echinodermata; feather stars and sea lilies) and has described over 20 new crinoid species. Crinoid taxonomy and systematics constitutes a major part of her research, and she frequently uses the fossil record of crinoids as a model group for studying macroevolutionary questions. Research questions she focuses on primarily relate to (1) extinction, including extinction risk, recovery, and evolutionary consequences of mass extinctions and (2) community paleoecology, including the assembly and phylogenetic structure of communities and how they change through time.