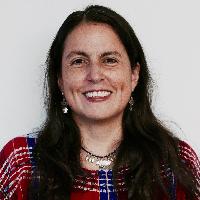 I am a trans-disciplinary scholar, teacher and curator. I have carried out most of my professional life in museum and educational spaces that engage with Indigenous knowledges, constantly integrating the practical and the theoretical. I am concerned with matters of voice and representation. I have directed and produced various documentary films, mostly collectively-directed, and co-produced a web series, Urban Indians. I bring a collaborative, transnational and multi-sited approach to my scholarship, curatorial work, filmmaking and teaching. I have taught fine arts, art history, movement arts and film, with a focus on Latin American, Indigenous, community, ethnic and documentary film and video arts.

My research in Indigenous media emerges from my extensive work at the Smithsonian Institution’s National Museum of the American Indian (NMAI), where I developed Latin American and Latino programs at the NMAI’s Film and Video Center for over a decade. The Film and Video Center (FVC) is our nation’s primary resource on indigenous media in the Americas, and is internationally recognized for its innovative work on Indigenous film and for producing the longest-running hemispheric indigenous film festival, the Native American Film + Video Festival. At the FVC, I organized screenings and brought film directors from across the Americas to present their work in the United States and Canada, occasionally touring video programs nationally.


I have served as a panelist, moderator, selector, and juror at several international film festivals, including Tribeca Film Institute, the Morelia International Film Festival and the International Film and Video Festival of Indigenous Peoples. I curate film programs for international festivals and advised the 2015 Berlinale’s NATIVe­­––A Journey into Indigenous Cinema, a bi-annual showcase of Indigenous film. Through this work, I have joined and helped sustain transnational networks of activists, scholars, filmmakers and non-governmental organizations that support, study and circulate Indigenous-made video, community media, and documentary films.

At the Center for Folklife and Cultural Heritage, I am focusing on Indigenous-language media projects. I develop digital storytelling strategies, as well as live and online programs with diverse communities. I am part of the editorial team of Folklife Magazine, a completely digital effort. I have co-curated major public programs, including the annual Mother Tongue Film Festival and On the Move programs for the Smithsonian Folklife Festival (2017 & 2018). I advise on "Brazil in D.C.," an ongoing research and community engagement project at Folklife, and study Capoeira Angola as a movement art, cultural practice and global community.

In 2016, I was awarded a Smithsonian Institution Scholarly Studies Award to support my research on “The Cinemas of Abya Yala Project,” about Indigenous film/video archives and special collections that will inform my manuscript on two decades of Indigenous filmmaking in Latin America (currently in progress).