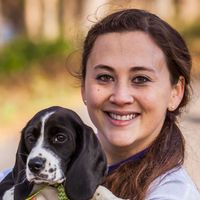 My research centers on developing assisted reproductive technologies for the genetic management of endangered species, with a focus on ovarian tissue culture and genome banking in canids and felids.