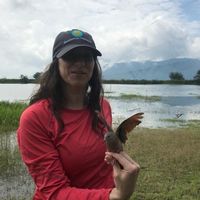 Amy Scarpignato is a research ecologist and bird conservation specialist at Smithsonian's National Zoo and Conservation Biology Institute Migratory Bird Center, which is dedicated to understanding, conserving and championing the grand phenomenon of bird migration. In keeping with these goals, Scarpignato is mapping the Bird Banding Laboratory’s database of band recoveries, which includes more than 5 million recoveries spanning 100 years. This information, along with the tracking data for all avian species in North America, will be synthesized and compiled into the Atlas of Migratory Connectivity for North American species. Scarpignato also heads the black-crowned night heron study, which tracks herons breeding at the Smithsonian's National Zoo’s bird house and a range wide tracking study for eastern and western meadowlarks.


Scarpignato, along with other scientists from the Smithsonian Migratory Bird Center, is part of the Migratory Connectivity Project, which works to improve the understanding of migratory connectivity, to promote full annual and life cycle biology research, and to advance the technological tools needed to track birds. This team has deployed more 1000 tags on 25 species of birds in the last few years. Scarpignato was the lead researcher on deploying a brand new and, at the time, the smallest satellite transmitter on red knots, which helped discover new breeding grounds in the high Arctic.

Scarpignato earned her bachelors of science in ecology and systematic biology from California Polytechnic State University San Luis Obispo in 2003, and her masters of science in natural resources/wildlife biology studying common ravens from Humboldt State University in 2011. From 2003 to 2009, she traveled around the country as an itinerant field biologist, working on nearly 15 different research projects with many different species of songbirds, raptors, waterfowl and shorebirds. After graduate school, she started at the Smithsonian Migratory Bird Center, where she currently works.

Scarpignato grew up in the Washington, D.C., Maryland and Virginia region. She then spent many years out west and traveling the country. She has always had a passion and curiosity for science, nature and unraveling mysteries, such as why, how and where birds go.